Solutions for the treatment of polyurethane foam

Our history, from the origins

As usually happens for all good things, Mazzola Srl company came up from one single man’s passion, and it was Antonio Mazzola’s passion for mechanical engineering. In 1958, just after the company in Saronno where he had been working closed, and thanks to the experience he had acquired, Antonio decided to start his own company together with his brother Mario. In a small shed in Caronno, the two brothers started up their adventure: the realization of machinery to process foam polyurethane, a new material that exactly in those years started to have a good diffusion in our Country. At that time, cutting machines for foam polyurethane were exclusively vertical, the electronic automation on machines did not exist, and Antonio Mazzola designed the first Made in Italy horizontal cutting machine. As usual for him, he chalk-designed every project in 1:1 scale, on the workshop’s floor.

In 1960 Fratelli Mazzola company was founded. The company was straightly pointing to the realization of mechanically strong machines. The activities grew up, and in 1972 the company moved to Rovello Porro, still the actual place, and took name Mazzola Antonio. In 1990 Giancarlo Mazzola, Antonio’s son, joined the company which changed name to Mazzola Antonio Snc, then becoming Mazzola Srl since 2002.

Nowadays Mazzola Srl is still a family-run company under Giancarlo’s aegis, legally representing administrator of the company, flanked by his sister Liliana in the administration and sales. The employees are involved in the assembly and processing of some special parts and structures. The company takes care of the mechanical design, electronic project, assembly, testing and fitting of the machines. It cooperates with trustworthy external partners for software, control panels, carpentry and turning of parts. 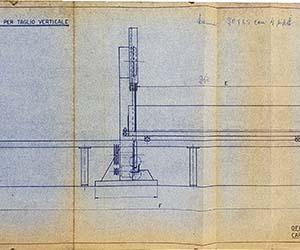 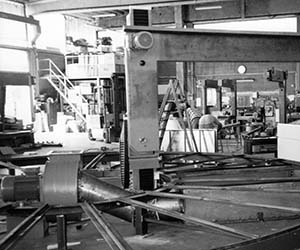 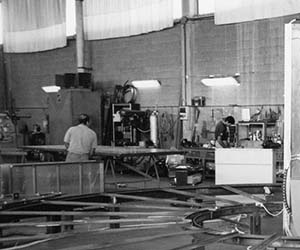 During its 60 years long story, Mazzola Srl has always been keeping up with times and market requests. “In 60 years, the market has been remarkably changing – as Giancarlo Mazzola explains – Machines had an evolution, more from technological than mechanical point of view, with demand of partial or complete automation. Actually, 70% of our sales goes abroad, especially to Asian Countries”. Starting from upholstery for chairs, sofas and mattresses, up to packagings. Nowadays, in several ways, polyurethane is used in insulation technologies, automotive, medical sector, from a very soft gradation (i.e. for upholsteries and kitchen sponges) to an extremely hard gradation (i.e. for kitchen tables, moulds, advertising panels and roof panels). “In the 2000s, thanks to a very goods and capable designer who joined the company, we started dedicating ourserves to special machines, on specific customer’s requests – Mr. Mazzola goes on – They are machines for the processing of particular (if not unique) materials, different from polyurethane, whose composition sometimes we don’t know and that can be patent-protected. Sometimes, some machines have been realized under exclusive agreement with customers. Approx. 10% of our production is dedicated to such type of machines”.

A strongpoint of the machines from Mazzola Srl is the remote assistance on automated machinery: a very important qualitative leap, especially for foreign market, because it not only permits to restore damages in real time from remote, it also supply the customer with all the info he needs to intervene on his own. In 2018 there was a step ahead in the software by changing its developer. “Now the software can support customer’s needs and improve the assistance and support that we will give him through the years – Mr. Mazzola explains – There is a simple primary interface, easily understandable and usable for whom is operating on the machine. Other pages, then, allow the machinery to interact with any office giving back, at the end of the day, details and information about manual and automatic production. By this way, all is computerized”. The goal for current year, is to go on in improving and updating, machine by machine, the software and electronic parts.

Basically important, since ever, is the retention of customers, with particular care for the post-sale. Mazzola Srl grants competence, quick support, spare parts availability and on-site interventions when needed, even abroad.

In recent years, the issue of “safety in workplaces” became remarkably important as social issue. We are very proud to be the only Italian manufacturer participating to VG15 European Work Group for the drafting of the legislation concerning the safety standards of PU (Plastics and Rubber Machines) cutting machines. Nowadays, our machines come up from our factory already equipped with the technical features that will be obligatorily required in the future.

“In the early 2000s we tried, together with our Italian competitors, to define UNI norms for manual machines”- Giancarlo Mazzola explains - At that time, a directive for machines was existing already, in force since 1995 and acquired by Italy in 1996, defining safety rules and parameters for machines’ construction in order to respect safety standards. But this legislation gave problems on the basic manual machinery, which was completely free of automation. “With norms regading machines already current – Mr. Mazzola goes on – EU allows one member to make an internal legislation but, if another member is interested in that same legislation, it could became European legislation. And German competitors were interested. So we worked on an armonized legislation for the EU under direction of CEN, which is in charge for checking and passing the norms”. At that stage, German competitors required that the new norms had to include all machines for the cutting of foam polyurethan and similar materials. So, the perspective of an immense work opened up, and the 3 Italian competitors decided to give up. “The procedure with CEN had now started up and with an Italian convenor, still our actual safety advisor. Giving up would have meant not only losing an important training opportunity, but also losing the advantage to have our convenor inside the European Group approaching this legislation”. So, Mazzola Srl remained as the only Italian company in the VG15 European Group, which has been working for 6 years approx. A great experience in the matter of safety which is still going on today, through constant updatings.